I did get something accomplished this week! Wendi at Bethadeezoo requested "girlfriend blocks" for her month *coughcough July* in my Simple Modern Quilt Bee.    You can read her tutorial here.   I have to say I LOVED this block.  I'm definitely a "liberated" modern quilter.
As my fellow participants posted their pics, they included little bios.  Of course, as I pieced these two girls, it's weird, but I really connected with the process of making them. They formed their own personalities. I don't think I could ever try my hands at doll making.  I'm having a hard time letting go of these ladies. 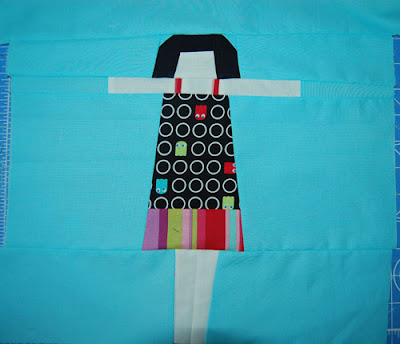 "Abby has a love for all things retro and is ready for her first day of school.  She's not afraid to let her style shine.  She's ready to make a statement with her jet-black dyed hair. While her friends love baking on the beach, Abby has always been obsessed with protecting and keeping her whitey white skin. She's definitely one of a kind, and not your average teenager."
The fabric I used for the dress for the next block reminded me of my Mama, and I wanted to incorporate a stack of books into the block ( I am of course, the Stay at Home Librarian).  From the beginning I used Mama as inspiration for this block.  Her name has been slightly changed ;) 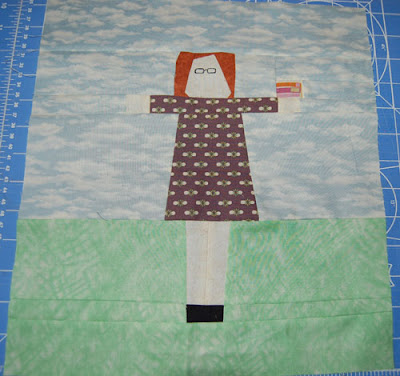 "Meet Darcy. She's your reliable girlfriend.  She's not one to get caught up in drama or gossip, so you feel comfortable and at ease while confiding in her.  She's too busy with her hobbies to betray your trust.  She sews and bakes(rarely for herself), but you'd be hard pressed to find her without her nose in a  book(or kindle as it were).  I had to draw on glasses, because she wouldn't be my Mama without them."
My five year old looked at all the girlfriends with me posted to the Flickr group, and she has decided she wants a girlfriend quilt.  I'd planned on asking for more Spiderweb blocks the next time I participate in a bee, but I might have to get this block instead.
Now, to get to the point.  My works in progress.  This is my spiderweb quilt, and I love it Love It LOVE IT.   I got all these blocks made for me in bees, but these are just half of them.  I want to make 22 more because this baby is going on my bed.  It'll also be my first full sized quilt.  Progress has been at a standstill because I ran out of the Alexander Henry Larkspur fabric.  I bought the last pieces they had over a Sew Fresh Fabric, so I'm ready to go again.  Well, and as a newish quilter, I don't have an abundance of scraps to use as strings.   The middle square is Kona Eggplant.  I have almost and entire bolt of it, so there is plenty of fabric for a border and the backing. 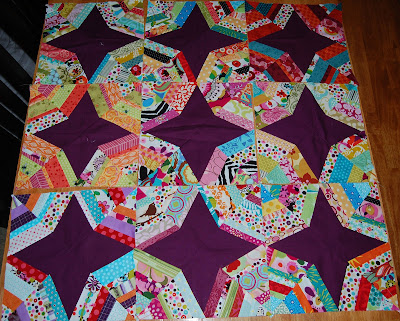 This is a quilt I'm making for a friend from high school.  I had my babies 10 weeks early.  My youngest twin, Aleah, died at 9 months old from problems directly related to her prematurity.  Stephanie had her baby several weeks early this summer.  I haven't seen Stephanie since we graduated in 1994 (ack), but I knew I wanted to make her a baby quilt as soon as I knew he was leaving the NICU a healthy baby.  I had these shot cottons and they are soft as a baby's behind.  I used the tutorial over a Quilt Dad for Wonky Log Cabins.   I have 6 blocks made, so it is a little bigger than a baby quilt.  I need to sash the blocks and figure out a layout.  The backing is the same as the sashing. 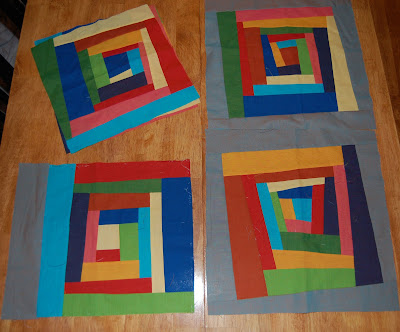 To do:
High on my priority list is to cut my charms for the Rainbow Fabric Charm Swap hosted by Ellison Lane.
Also, I need to make my bowties for the Scrappy BowTie Block Swap.
Projects with little done:
Garden Fence Quilt Along- I'm not too far behind.  I want to get the two previous things done before I start anything else.  I have two fabrics I'm thinking of using. I have the Fiesta prints from the Hope Valley line, and I have Amber from the Heirloom. I don't know which to do.
Urban Lattice Quilt Along-  I have the fabric, and one FQ partially cut.  I'd totally forgotten about it until I started this inventory.
Houndstooth quilt- I have the black and white fabric, and I've drawn up a pattern on graph paper.  I got the idea from my cosmetic bag. I've since discovered ready made patterns, that I might just go ahead and buy for simplicity's sake.

Hi Manda,
I just had to comment because I love, love, love the two girlfriends and their stories! The spider web blocks look great and of coarse who doesn't love a good I spy quilt with two cuties. I saw your guest post too. You are one busy gal. : )

lovely girl blocks .. btw the houndstooth is also in one of the Fat Quarterly issues ... that way you get more for your buck! x