I can't even excuse my iPhone for the poor pictures. This is my good camera, but at about 4 o'clock in the afternoon.  These charms you see in this quilt were collected from the Japanese Charm Swap over at GenX Quilters.  The pattern is from Made by Rae.  I have a confession to make, but more on that later. 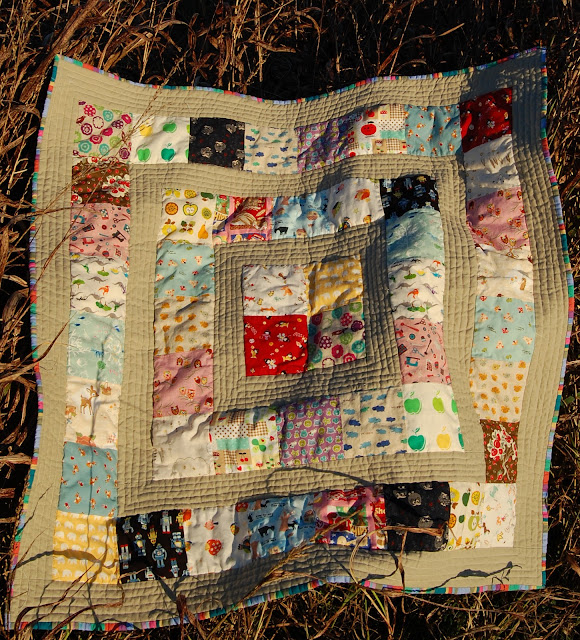 I used Mettler Silk Finish thread for the quilting and can I say Yum-my. I'm an Auriful die hard, but this thread is wonderful.    This is not my 1st try at straight line quilting.    I also straight line quilted Ada's I Spy Quilt, but that was a bit different. Since it was diagonal lines, I could start and finish the lines easily off the edges of this quilt.  In quilting this,  I was lost when it came to changing the bobbin, or starting and stopping a new line.  Do you "lock down" your stitch?  I did, although not consistently, and it shows.  The quilting isn't perfect, but I'm pleased.  Many thanks to my Mr. for drawing all those lines for me.  Turns out, the rows weren't all that even.  I never would've finished it.  If I were better at math, I'm sure quilting would be more enjoyable, but don't tell Miss and Mrs. Wilbourne I said so.  ( I was educated by a daughter for two years in middle and then her mother for two years of high school.)
I had originally planned to bind this with a flange binding, and it was going to be so cool, but I transposed the measurements and cut the strip widths wrong and ended up wasting a good bit of my Kaffe Fassett Stripe. (much gnashing of teeth).  In the end, I just decided to do a plain old binding, but a bit skinny.  I cut my binding to 2.25. 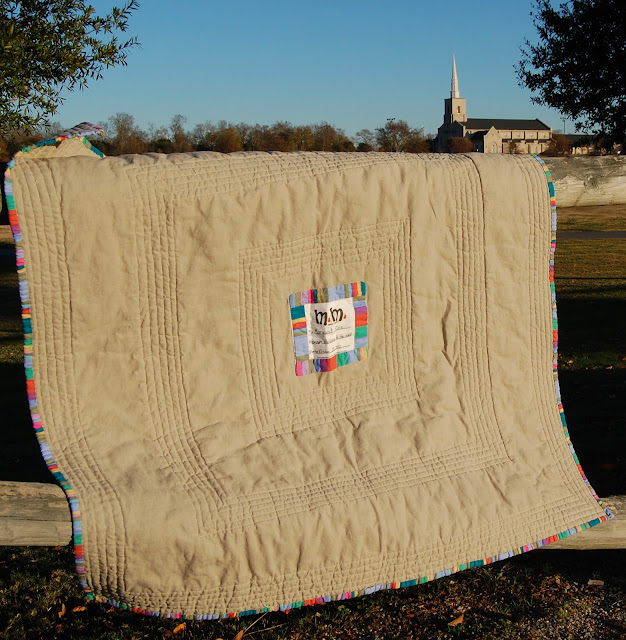 My girls wanted to pose with the quilt.  Ain't they some cuteness? 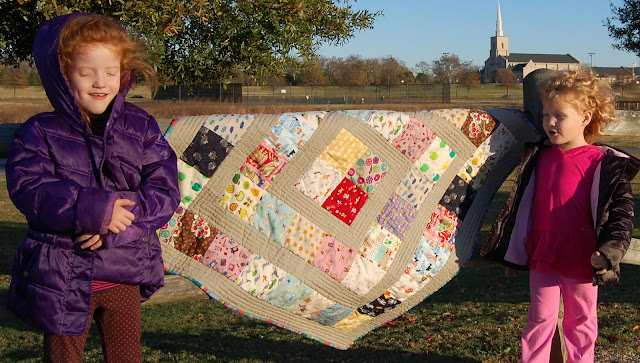 I put my spoonflower label right smack dab in the middle of the back, well, because that was the only place to put it without covering the quilting.  I started to make a pieced back for this one, but I decided to keep it simple.  I made the label according to this tutorial. 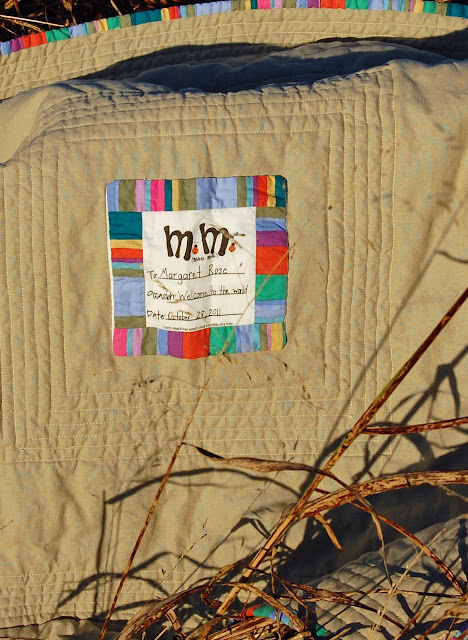 I know you didn't forget about my confession.  Basting purist should stop here.
I spray basted this quilt, and I LOVE IT.  It was the 1st quilt where I didn't have some sort of issue with slippage.  This sucker was secure.  Originally I decided to use the adhesive because it's all linen, and I expected it my be a bit slippy as my 3 year old would say.  After my experience, I don't think I could go back to pin basting again.  I know that it is significantly more expensive than one batch of basting pins, but my goodness, the $13 I paid for the can of 505 was well worth it.
So, there you go, my first quilt finish in months, and this was a quick one!  It's washed and dried, and ready to be packaged to ship to a waiting Maggie.
Stats:
Name: Japanese Charm
Pattern: Storytimes Quilt- Made by Rae
Quilting: Straight-line channel quilting on my Janome 8050
Thread: Mettler silk finish (in natural I think)
Backing and sashing: Essex Linen- Putty
Fabric:  Japanese Fabric Charms
Binding: Kaffe Fassett  Serape in Green

Lovely quilt and the label is just great too. I love spray basting and I haven't had any wrinkles or creases at all.

Manda this is really lovely! What a great way to use your Japanese scraps ... I want to copy you!

I haven't tried spray basting yet, but I do use a lot of linen and it really can be 'a bit slippy'! I'm sorely tempted for my next one.

Weirdly, I have used Elnet hairspray to stabilise it all before pinning! don't ask ... but it worked :)

Love the layout of your I Spy squares. Too cute!